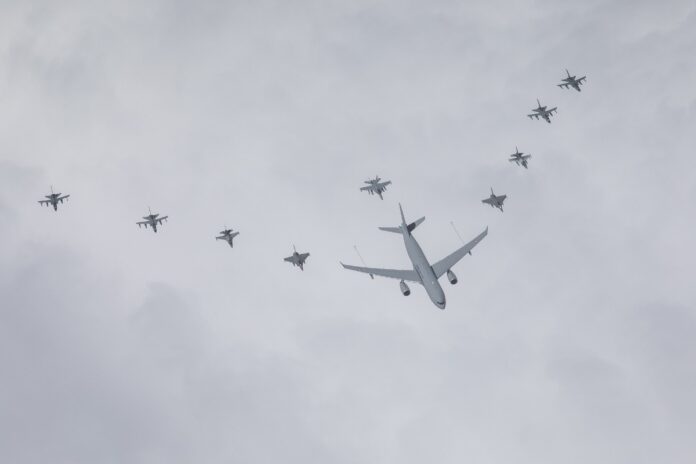 RAMSTEIN, Germany – Seven Air Forces from across the Alliance joined their aircraft and ground systems for a training event in Romanian airspace to conduct coordinated combined air-to-ground drills demonstrating interoperability and preparedness.

On July 28, Allied Air Command led a dynamic long-range operation above Romania controlled by the Combined Air Operations Centre at Torrejón, the Romanian Control and Reporting Centre and a French Airborne Warning and Control System plane. Local Romanian F-16s were joined by French Rafale and German Tornado jets, which deployed from their respective home bases. They linked up with US Navy EA-18 fighter aircraft from the US Harry S. Truman carrier strike group currently sailing in the Adriatic Sea. The formation simulated engagements with Belgian F-16 and Spanish F-18 fighters and the French SAMP/T surface-based air defence system.

“This enhanced Vigilance Activity enables forces to address a large spectrum of threats, from tactical to strategic, emanating from many directions,” said Lieutenant Colonel Raphael, who is part of the planning team for the activity at Allied Air Command. “The participating air assets are simulating how to degrade an adversary’s integrated air and defence system in order to permit follow-on operations and freedom of manoeuvre required for defensive operations in NATO and international airspace.”

“Bringing seven Allies together for such a complex training event underlines NATO’s ability to concentrate multinational fires and effects from air, maritime and land components in the same place at the same time and to ensure it has the capability and interoperability to respond in the event that the Alliance is threatened,”

The event culminated in a fly-by of participating aircraft at Mihail Kogalniceanu Air Base near Constanṭa, Romania, demonstrating NATO’s advanced multinational Air Power capability. The activity is in compliance with international laws and standards and is not a response to current geopolitical developments, but embedded in the Alliance’s vigilance activities aimed at shielding the eastern flank and assuring NATO Allies in the region.